Telephone communication with moving trains goes back further than most people might imagine, as this extract from THE STRATFORD UPON AVON & MIDLAND JUNCTION RAILWAY, by Arthur Jordan (Oxford Publishing Company, 1982) illustrates:

The SMJ had shown an interest in technological progress as early as 1912, when in July of that year the following message was transmitted from a train travelling between Ettington and Stratford-upon-Avon, picked up in the signal box and conveyed to His Majesty the King, then on a visit to Bristol:

‘Representatives of railway companies, universities and scientific bodies are today inspecting the Von Kramer wireless inductive railophone system for signalling to and from trains to stations. With this system it is possible to stop trains in motion by pressing a button in the signal-box. This telegram was dispatched wirelessly from a moving train by the inventor’.

Professor Silvanus Thompson, presiding over the gathering of some 120 guests in a marquee behind Stratford-upon-Avon station, thought that there was great scope for this invention whilst the Stratford Herald expressed the following opinion:

‘. . . it is possible in the future that our borough will attain considerable importance in the eyes of the scientific world as the birthplace of a system which may play a prominent part in the railway kingdom, inasmuch as it claims to ensure safe travelling by rendering collision impossible, and repairing (also recording) mistakes made by careless signalmen. We refer to the Railophone double-automatic signalling apparatus.’

Von Kramer had conducted his first experiments as far back as 1910 at Three Bridges, Sussex, on the London, Brighton & South Coast Railway when he had succeeded in establishing a telephonic link between an express train and a signal box. In April 1911 a public demonstration of this system for a 'phone link between train and signal box had been given on the SMJ at Stratford-upon-Avon when Miss Made Corelli, authoress, performed the inaugural ceremony. Since then, making use of a coach loaned by the Great Central Railway, the inventor had perfected his system so that it could be used for controlling trains as well as for communication.

These proceedings were reported in the local newspaper thus:

‘Very interesting were the trials devoted to distress signalling, a powerful hooter on a moving train sounding by the simple closing of a switch in the signal cabin, and then the mere pressure of a button by Professor Silvanus Thompson automatically pulled up the train passing at a good speed into the station. The train ran from the old carriage shed through the station against the railophone signal, which was at danger, and directly the Professor touched the button the hooter on the train showed that the contact had been made, and the screeching wheels and dense smoke from the engine proved that the train was slowing up under compulsion. The driver and guard were powerless to do anything until the pressure was released and the train was permitted to resume its journey’.

Shortly afterwards Von Kramer was answering questions when he accidentally leant on the train-stopping button bringing to an unexpected halt the trial train which was backing into the platform!

To end the day, the assembled visitors were conveyed by train to Clifford Siding where they alighted and climbed on to a bridge to witness ‘possibly the most realistic tests of the day’. Two trains raced towards each other on the single line and use of the Railophone system averted a head-on collision. Perhaps this was not quite so exciting as it sounds because the Herald told its readers, ‘A liberal margin was allowed for safety, and so there were no thrills’.

At the luncheon provided for the visitors Von Kramer related that during the months in which he had been carrying out tests along the SMJ line a shunter had one day commented to [the railway's general manager] Willmott, ‘Don’t you think that Railophone chap is a bit dotty? He does nothing at all except run backwards and forwards’ (laughter). More recently, that shunter had expressed the opinion that Von Kramer had ‘got a snip this time’ (laughter and applause). However, despite the encouraging results of the tests, nothing further was heard of the Railophone.

Although this text does not explain how the system worked, the understanding is that signals were transmitted by magnetic induction to wires between the rails or at the side of the track. This was by no means the first attempt to communicate with a moving train, as can be discovered from Fahie's History of Wireless Telegraphy (New York, 1901).

A later description is found in My Magazine, a publication for children, in volume 9 dated 1915. In an article on 'What Wireless has Done and What It Will Do', the unsigned author (probably Arthur Mee) writes: 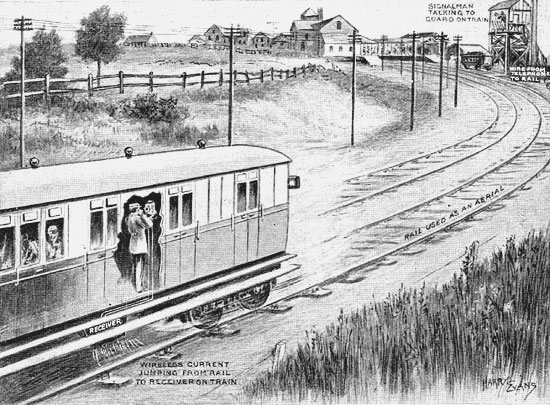 Wireless communication with a moving train

Stopping a Train
The automatic signalling of trains has made great strides during the last few years, and already wireless telegraphy has been employed for their control. Some striking tests were carried out recently by Professor Wirth at Nürnberg, in which trains several miles away were brought to a standstill within a  few seconds by wireless signals from a signal-box. Once again it is the  coherer which is employed to actuate the mechanism.  An aerial wire stretched over the train collects wireless energy sent out into space by means of the telegraph wires, which act as radiators. The wireless transmitter at the signalling cabin is attached to the wires, and when a signal is sent it is caught by the aerial on the train  and makes the coherer a good conductor of electricity, so that a current can pass. through it to a “relay,” which closes another electric circuit operating the electric brake on the train. A relay is an instrument which, affected by a very minute current, can in turn “switch on” a much heavier current. Wireless train control has also been tried with quite satisfactory results in England, and its application on a wider scale is more than likely in the future. A train stopped by wireless waves

[With thanks to the Upacut Archives]