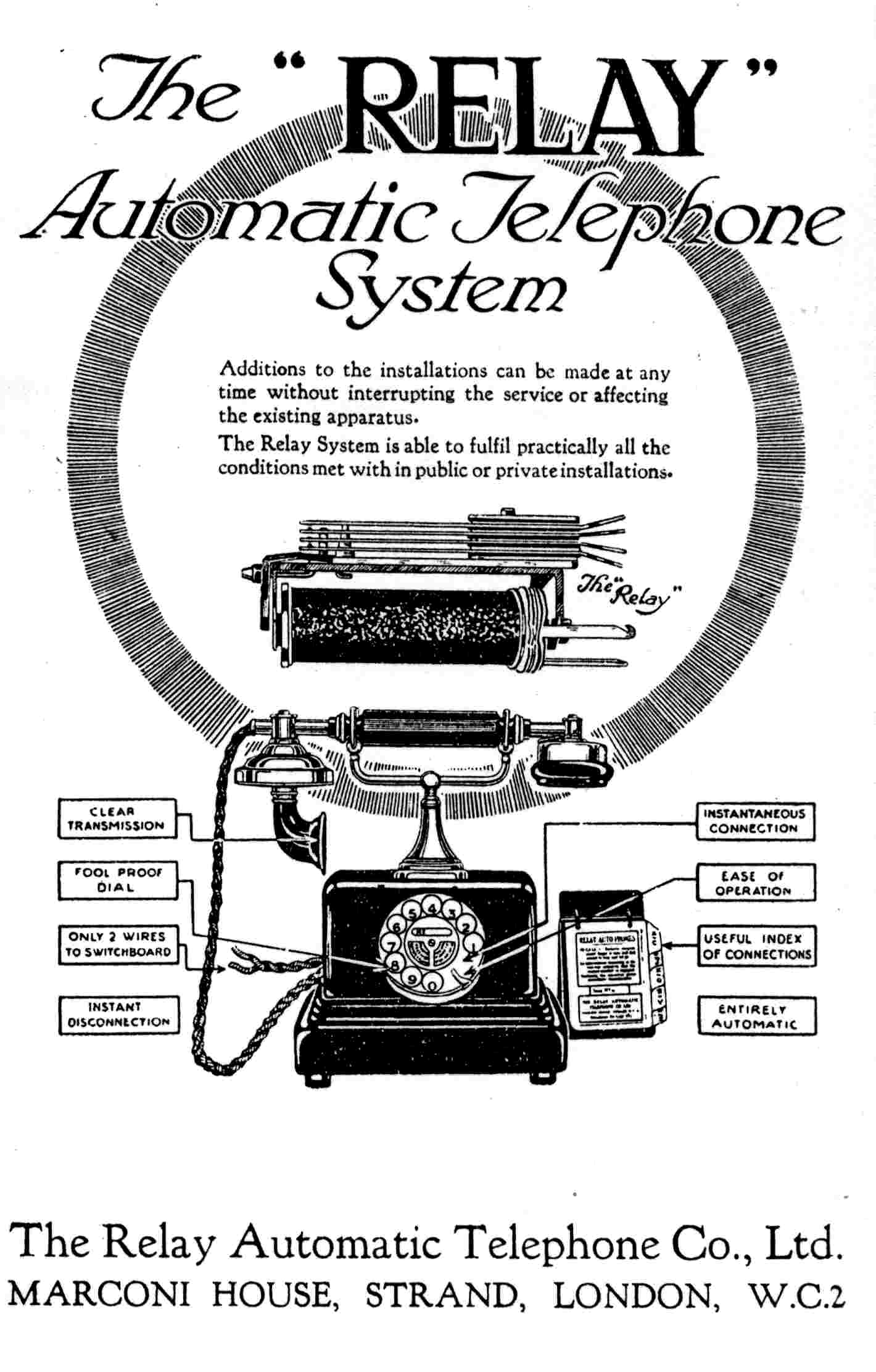 During the 1920s the Relay Automatic Telephone Company (RATCo for short) achieved some success with its system for PAX and PABX installations. One of the first was in December 1923 at the British Empire Exhibition (Wembley) where a system with in excess of 200 lines linked the pavilions of the various dominions and colonies with each other and the exhibition headquarters. The actual apparatus was one of the public exhibits. The company made great play of the speed of connection ('through in a second') and the simplicity of the equipment.

One customer taken in by this was Lloyds Bank, who had a large PAX system using P.O. private wires to interconnect its headquarters with most branches. The head office latterly used a Siemens 17 PAX but the bank branches were equipped with RATCo PAXs.

By far the largest installation in London, and by all account in the whole country, was that of the London & North Eastern Railway (LNER), provided in 1927. Some 600 lines were installed, with about 10,000 relays and a quarter of a million contacts. Outgoing calls to the public network were connected via a manual switchboard because of the Post Office's insistence (at that time) on no electrical contact between their exchanges and others. Four relay exchanges were installed, with the following numbering scheme:

Kings Cross exchange was the only one of these that I saw. It closed about 1973 and was located on the top floor of the West Side offices, alongside Platform 8 (platform 10 in those days before renumbering). Its physical location was on the first floor, about halfway along the platform from the barrier. Reg Freer, a rather resourceful technician, had his office/mess room opposite and had wired up a contact on the door to that corridor so that a discreet buzzer sounded whenever anyone came up the stairs to visit the exchange.

The equipment was too bulky to save; there were a large number of steel-cased cabinets, all painted black and a manual switchboard of about four positions in the room next door. As mentioned, all external calls had to go through the operator; you could not dial 9 for an outside line.

Sam Hallas recalls one of the technicians telling him the key switches in the switchboard were so worn that the points on one side of the contacts had worn holes right through the plates on the opposite contacts, making connection rather intermittent!

The RATCo exchange on the station at coexisted with a PABX3 in the diviisonal offices at Great Northern House, just down Euston Road. This was because the RATCo didn't have sufficient capacity to handle GN House as well. One relic of the RATCo survived well into the 1970s and perhaps does even now. The 'Kings Cross Dining Club' (canteen) was in the last building on the top floor of East Side Offices and just over the entrance door was a Bellset No. 1 with a gold 'Relay System' transfer on the front. I always wanted to snaffle this but in truth it was in very poor condition.

In common with most other relay systems, the equipment at Kings Cross did not return dial tone. This was a frequent source of fault reports to the technicians, who took pleasure in telling their calls that this was quite correctthere was no dial tone because the system was so fast it didn't need one! Photos will follow later.